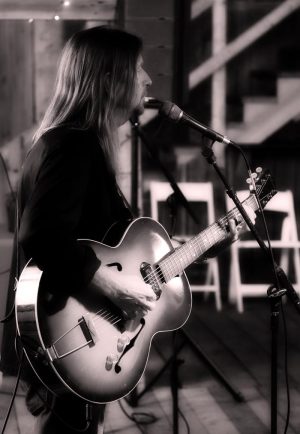 Gordon Bonham brings together a mix of styles from the Mississippi Delta to the back alleys of Chicago, from big Texas shuffles to jumpin’ West Coast swing. After several years of tearing up the road, Bonham brings it all together in Indiana, the Crossroads of America.

Bonham has performed several times with the legendary Pinetop Perkins, most notably in Cleveland along with Robert Lockwood, Jr. as part of the grand opening of the Rock and Roll Hall of Fame. He played off and on for ten years with the late Indianapolis blues mandolin man, “Yank” Rachell, as well as Chicago piano man Jimmy Walker. He also handled the guitar spot for the late harmonica ace Gary Primich in Austin, TX in the late “80’s. Gordon has worked three times with Bo Diddley as band leader and rang in the 2000 new year at the Slippery Noodle playing with Blues Brother Matt “Guitar” Murphy. Other notable gigs include a mini tour with “Ice Cream Man” John Brimm and sharing the Main Stage at the Chicago Blues Fest with Billy Boy Arnold and the late Sunny Land Slim. Bonham has also opened for such greats as Buddy Guy, Robert Cray, The Fabulous Thunderbirds, Solomon Burke and B.B.King.

Locally, Bonham was a founding member of the critically acclaimed Cooler Kings, followed by the Gordon Bonham Blues Band. Their CD “Low Down and Blue” was chosen by David Lindquist of the Indianapolis Star as no.3 of the Top Ten Releases of 1999. He continues to be a host of the blues jam at the world famous Slippery Noodle Inn, and is a regular with the Indianapolis Jazz Fest.

With two European tours, and recently two tours of Sweden, the growing list of memorable gigs and credentials continue to stack up, making Gordon Bonham’s music a must have for anyone who appreciates serious and soulful blues.